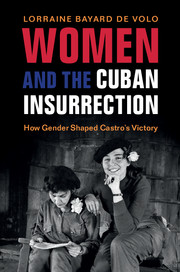 Women and the Cuban Insurrection
How Gender Shaped Castro's Victory