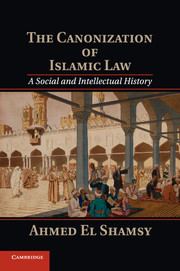 The Canonization of Islamic Law
A Social and Intellectual History