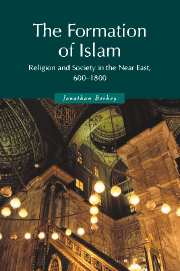 The Formation of Islam
Religion and Society in the Near East, 600–1800