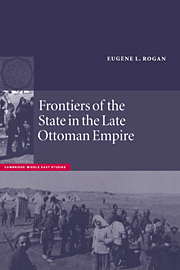 Frontiers of the State in the Late Ottoman Empire
Transjordan, 1850–1921