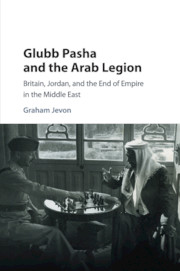 Glubb Pasha and the Arab Legion
Britain, Jordan and the End of Empire in the Middle East