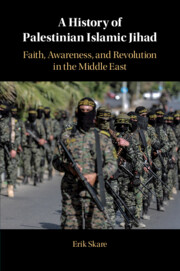 A History of Palestinian Islamic Jihad
Faith, Awareness, and Revolution in the Middle East