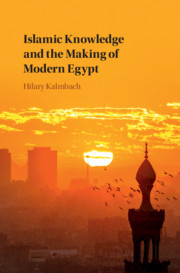 Islamic Knowledge and the Making of Modern Egypt