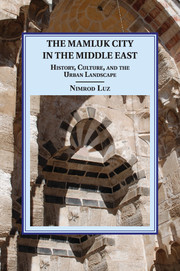 The Mamluk City in the Middle East
History, Culture, and the Urban Landscape