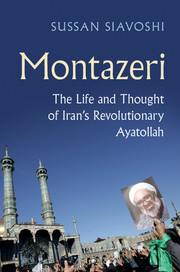 Montazeri
The Life and Thought of Iran's Revolutionary Ayatollah