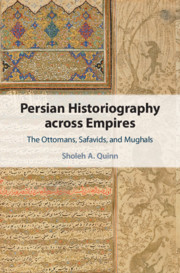 Persian Historiography across Empires
The Ottomans, Safavids, and Mughals