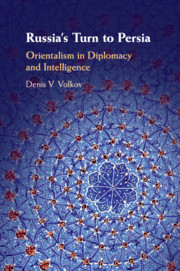 Russia's Turn to Persia
Orientalism in Diplomacy and Intelligence