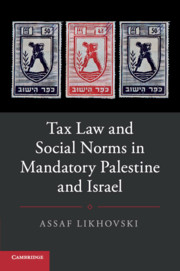 Tax Law and Social Norms in Mandatory Palestine and Israel