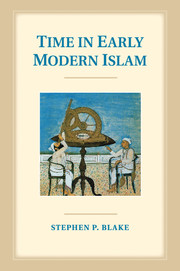 Time in Early Modern Islam
Calendar, Ceremony, and Chronology in the Safavid, Mughal and Ottoman Empires