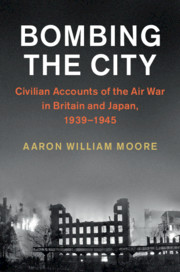 Bombing the City
Civilian Accounts of the Air War in Britain and Japan, 1939–1945