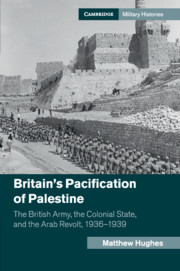 Britain's Pacification of Palestine
The British Army, the Colonial State, and the Arab Revolt, 1936–1939