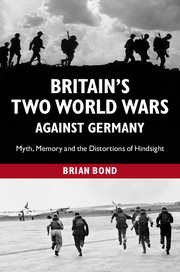 Britain's Two World Wars against Germany
Myth, Memory and the Distortions of Hindsight