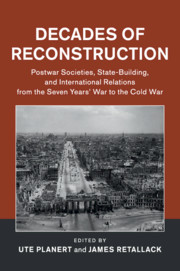 Decades of Reconstruction
Postwar Societies, State-Building, and International Relations from the Seven Years' War to the Cold War