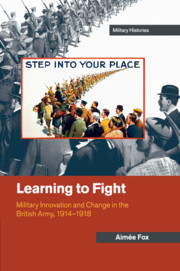 Learning to Fight
Military Innovation and Change in the British Army, 1914–1918