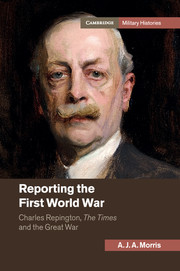 Reporting the First World War
Charles Repington, The Times and the Great War