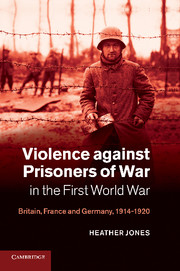 Violence against Prisoners of War in the First World War
Britain, France and Germany, 1914–1920