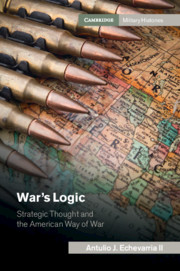 War's Logic
Strategic Thought and the American Way of War