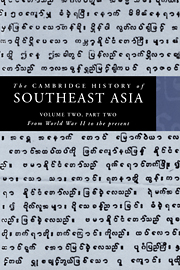 The Cambridge History of Southeast Asia

Part 2. From World War II to the Present