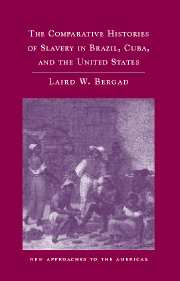 The Comparative Histories of Slavery in Brazil, Cuba, and the United States