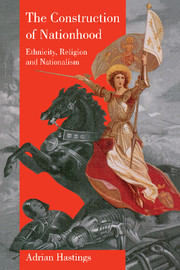 The Construction of Nationhood
Ethnicity, Religion and Nationalism