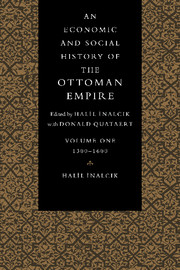 An Economic and Social History of the Ottoman Empire, 1300–1914
2 Volume Paperback Set