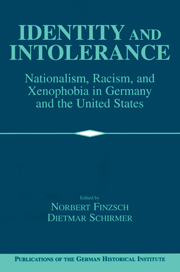 Identity and Intolerance
Nationalism, Racism, and Xenophobia in Germany and the United States