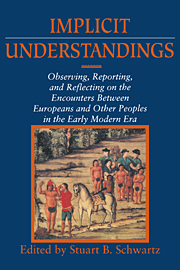 Implicit Understandings
Observing, Reporting and Reflecting on the Encounters between Europeans and Other Peoples in the Early Modern Era