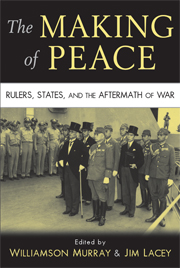 The Making of Peace
Rulers, States, and the Aftermath of War