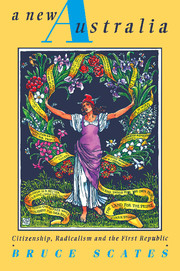 A New Australia
Citizenship, Radicalism and the First Republic