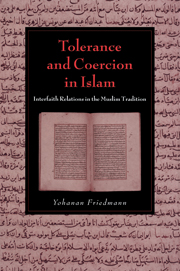 Tolerance and Coercion in Islam
Interfaith Relations in the Muslim Tradition