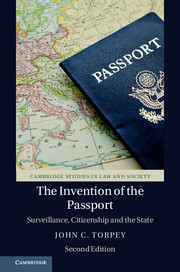 The Invention of the Passport
Surveillance, Citizenship and the State