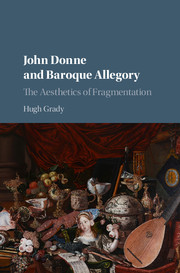 John Donne and Baroque Allegory
The Aesthetics of Fragmentation