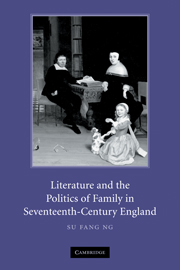 Literature and the Politics of Family in Seventeenth-Century England