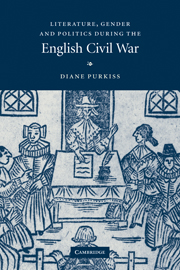 Literature, Gender and Politics During the English Civil War