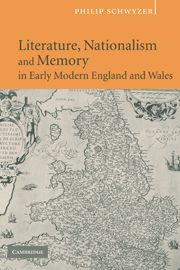 Literature, Nationalism, and Memory in Early Modern England and Wales