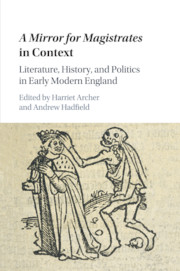 A Mirror for Magistrates in Context
Literature, History and Politics in Early Modern England