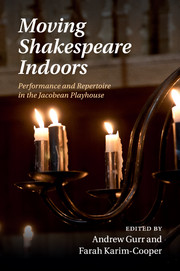 Moving Shakespeare Indoors
Performance and Repertoire in the Jacobean Playhouse