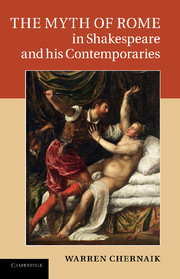 The Myth of Rome in Shakespeare and his Contemporaries