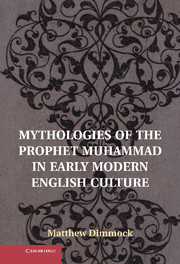 Mythologies of the Prophet Muhammad in Early Modern English Culture