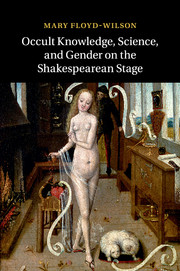 Occult Knowledge, Science, and Gender on the Shakespearean Stage