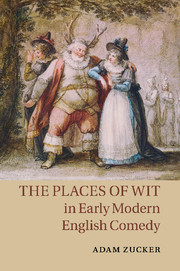 The Places of Wit in Early Modern English Comedy