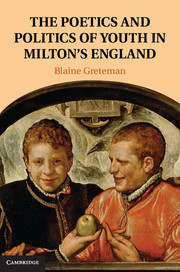 The Poetics and Politics of Youth in Milton's England