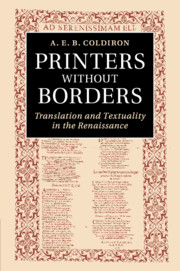 Printers without Borders
Translation and Textuality in the Renaissance