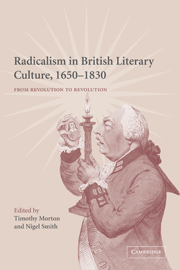 Radicalism in British Literary Culture, 1650–1830
From Revolution to Revolution