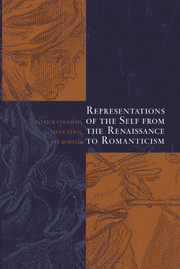 Representations of the Self from the Renaissance to Romanticism