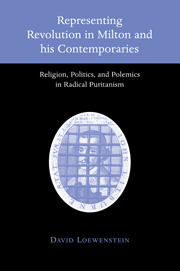 Representing Revolution in Milton and his Contemporaries
Religion, Politics, and Polemics in Radical Puritanism