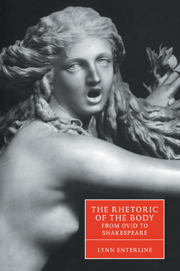 The Rhetoric of the Body from Ovid to Shakespeare