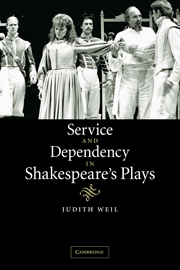 Service and Dependency in Shakespeare's Plays