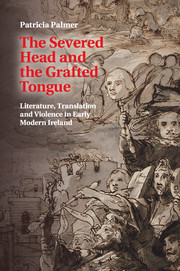 The Severed Head and the Grafted Tongue
Literature, Translation and Violence in Early Modern Ireland