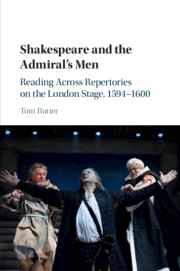 Shakespeare and the Admiral's Men
Reading across Repertories on the London Stage, 1594–1600